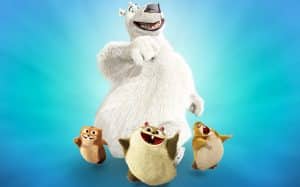 Norm of the North

The polar bear Norm, heir to the throne of the Arctic, does not know how to hunt a seal, feels no pleasure in putting on a show to humans passing by and not sure what to make of his innate ability to speak “the umanese”. But when the construction company of Mr. Greene looks on its ice with a luxury home prototype, determined to colonize the area, Norm understands that, if anyone can ward off the company, that’s just him.
The journey of the title thus leads the white bear from Polo to New York, where no effort to be mistaken for an actor a little ‘capricious and gain the role through which will deliver its message to the world. Too bad, at this point, that the same message is affected by an unusual fate for a film of this genre: without prejudice to the high-level exceptions, such as Ice Age and the subsequent sections, not infrequently, in fact, the environmental issue is likely to cover greater weight in the economy of the film, compared to the narrative and visual inventions dynamics, as if the gravity of the issue scontasse somehow the commitment in the technical realization of the work which illustrates it. Here, however, the severity of the impact that would cause a human settlement on the habitat of the great North, is given largely for granted, with the result that the Norm message comes through loud and clear as it should, especially to the right of the public to the ears vision, that of the young spectators, novices of the big screen as a novice is the Splash Entertainment, the television company to his first feature for the room.
And “unfortunately” I did not end, because even on the front of the cure of the image and the plot, The Journey of Norm does not reveal an adventure particularly brilliant: once again, the intentions (the bear dance, the role comedian of lemmings, the moving section of his grandfather ratio) are better than the final results.
That said, in bear no fairytale quality that manages to save their home by allying with a whole heart and brain girl, who helps him make money the gift of nature, there is a core content so universally powerful that vision does not disappoint in any case the children and even those who, between them, already has a good familiarity with the cinema and not only with the TV version, normally more episodic and brief, that characterizes this animated product.