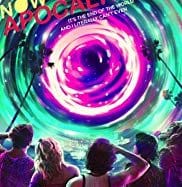 Starz has a long history of trying to move the Overton window for free nudity; shows such as The Girlfriend Experience and Outlander have cleverly taken advantage of the apparent mandate for sex scenes. Now the creators of the Apocalypse Gregg Araki and Karley Sciortino use it almost as an exaggerated parody, especially in the simultaneous fascination and exasperation of the universe with Ford.
Ulysses is haunted by the visions of lizard aliens who come to conquer the Earth’s population in a very intimate way, but it is not clear if anything happens. ”