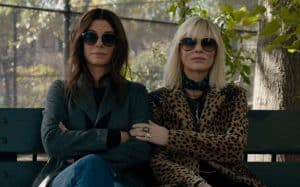 Debbie Ocean spent five years in prison planning a blow of the century worthy of the exploits of his brother Danny, now given up for dead. Debbie’s plan is ambitious: stealing a 150-million-dollar Cartier necklace, and doing so during the annual Gala of the Metropolitan Museum. But to complete that plan, it needs allies, all women because “one he notices and one ignores”. The first member of the band is his historical partner in crime, the biker Louise. Followed by an expert in jewelry, a hacker, a pickpocket, a fashion designer and a recipe machine. Will our antiheroes manage to score the big scam?

Ocean’s 8 is the fourth episode of the saga that began with Ocean’s 11 – first the historical one in 1960 featuring the Frank Sinatra Rat Pack, then the three segments directed by Steven Soderbergh and starring George Clooney and his companions.
Here both the director and the screenwriter change, becoming a screenwriter: and this is probably the first problem. In fact, Gary Ross, the director of Big but also of Hunger Games, co-signed the script together with the screenwriter Olivia Milch, author (and director) of the award-winning independent film Dude.
The result is a “tug-of-war” script between the sensibilities of a sixty-year-old male (Ross) and a thirty-year-old female (Milch). Perhaps it would have been better if the project was delivered entirely in the second saddle, unripe but in line with the times and with the female themes. The direction and writing of Ross denote two problems: the lack of agile and brilliant rhythm of the episodes narrated by Soderbergh, and the undeveloped pattern of a plot whose most subversive elements come to the surface only here and there, like a karst river , to pierce the coated surface of the supporting weave.
Ocean’s 8 abandons itself to “feminist” statements, but these sound like pompous proclamations, in the same way as the superlatives “the blow of the century”, “the mundane event of the year” and “the safest museum surveillance in the world”. Even the mechanism of fraud is mechanical and redundant, as well as full of implausibility. On the other hand, the attention to the “feminine” details makes a positive difference: the initial theft of Debbie in the wholesome cosmetic department of the Bergdorf department store (which will inspire the same enthusiasm of Pretty Woman’s shopping session among the hateful orders of Beverly Hills), or the use of a changing table in a public bathroom as a table top for cataloging diamonds.