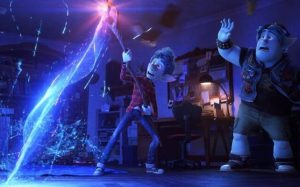 In a fantasy universe that technological progress has made equal to ours, the elf Ian is an adolescent like many others, clumsy and not very sure of himself. Mother Laurel and the volcanic big brother Barley cannot completely fill the void left by a father who disappeared before Ian was born, but for his sixteenth birthday the boy receives a magical artifact as a gift that can make him come back to life for 24 hours. The spell only succeeds “halfway”, simply making the legs of the parent elf appear and projecting the two brothers towards an adventure against time to finally see the father’s face again.
First original Pixar story three years after Coco, Onward is a good level entry in the now large catalog of the Disney animation house, with a sure emotional impact although not being among the most complex or richest from the narrative point of view.
A second work by director Dan Scanlon, who had made his debut with the prequel Monsters University in 2013, Onward makes simplicity the winning card, like the one that decides a game of Magic despite not being the highest.
A film about magic but actually anchored to everyday life, it tells of a fantastic world that has allowed itself to be softened by comfort, and which, although not reduced to one with the televisions as in Wall-E, has at least forgotten the power of magic relegating spells and curses to the pages of books and card games, and unicorns to battle for the remains of trash on the sidewalk. With a title that returns to invoke a direction, as in Up !, the invitation this time is to get on the road (aboard the van “broken” and painted, of course) and to get involved, always “ahead” and possibly without choose the most obvious way.
Scanlon himself succeeds, even in a film with a system already written like all the stories of mythology and prophecies: Onward earns a third act all to cry because he knows how to steer the affections and find the bond between brothers in a universe of forced mothers chasing and lovingly empty father figures. According to the Pixar factory manual, the central idea is small and often personal, in this case born from the director’s childhood spent without a father, and the execution is touching enough to make you forget a vision of the world made of provincial life, exaltation of a lost (and perhaps never existed) past and rather conservative family roles.