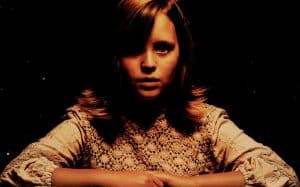 Los Angeles 1967. Alice Zander, recently widowed, makes his living with the complicity of Lina and daughters Doris, pretending to be a psychic able to summon the dead. One day is attracted by the idea of ​​being able to increase the effectiveness of its sessions by staging a Ouija board. But start taking drugs even younger daughter Doris is convinced that he made contact with his father. It comes instead of other entities that are hidden inside the house.
Mike Flanagan proves to know the rules of this particular horror territory and to know how to merge different elements taking into account the lesson that, in these years, came from the Iberian cinema. Because the script, written by Jeff Howard, is not limited to the ringed deja vu situations relating but also works on contextualization. It is no coincidence that the film opens with a precise date and that television, as well as voltage films, send news about the conquest of space. While you go to the Moon human beings still need to speak with the dead and are willing to be fooled if only to be able to believe (interesting in this respect the contrast between father and daughter in the opening scene that brings two generations) .
Then there is the formal respectability that permeates social relations and prevents doing explicitly deal with the feelings (see the relationship between the mother of the girls and the priest before wearing the cassock had been married). There are plenty of twists and turns, the possessions and the usual inevitable cellar but the inclusion of Nazi perversion in an American context, it is at least curious. It should also particularly appreciated the performance of the young Lulu Wilson who has already experienced the kind having made his debut feature film Deliver us from evil. Not only his eyes but his own posture are able to offer to the character of Doris the right amount of innocent ambiguity around which, after the opening bars, can develop effectively throughout the film.