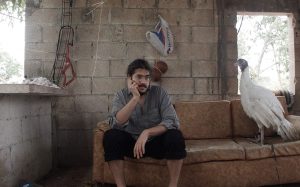 Out of Sight, Out of Mind

A group of friends in California meets for a last trip to the beach, New Year’s Eve. The next morning one of them, Travis, sets off on a long trip to Mexico where he will find himself caught up in an attempt at socialist revolution. Another member of the group, O’Brien, begins to behave abnormally, alerting all friends. Divided between the desire to help O’Brien and the complications of their personal lives, the boys approach and move away, unable to really be together but also to say goodbye.
At times annoying and for this very reason effective: the self-imposed process of a group of millennials well aware of being the satire of themselves.
In a long, broad film with multiple perspectives, the director Brian Follmer almost touches the epic tones to tell a misfit band that symbolizes the various faces of contemporary American ennui: slacktivism, or social sofa “I too want to become an activist, maybe I open a Youtube channel”), the serial dissatisfaction of the intimacy with the Tinder brand, the obsession with health trends that are anything but demonstrable, the ephemeral fame of digital platforms and rampant consumerism .
In the hands of someone else it might seem a suspicious operation, a too comfortable overview of clichés, each assigned to a different character. And instead Follmer, who had already touched similar strings in two previous films, takes the subject so seriously that he accepts the risk of derailing the film itself, with a toxic satire that is unpleasant both for the spectator and for this group of disillusioned souls.