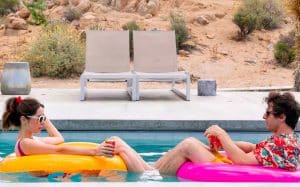 It’s November 9th. Nyles wakes up next to his girlfriend Misty and, with her, reaches the place where Tala and Abe’s wedding is celebrated. During the reception that follows the actual ceremony, he launches into an impromptu speech that allows Sarah, the bride’s sister, not to have to do one in turn: the girl is in fact drunk and has not prepared anything to say despite be the wedding witness. United by the circumstance of the speech and made complicit in the discovery that Misty betrays her boyfriend, Nyles and Sarah discover they like each other but their magical moment is ruined by a man named Roy who injures Nyles with an arrow: the boy runs to a nearby cave to reach a mysterious light that is inside him and warns Sarah not to follow him. However, she does not listen to him and is sucked with him in a whirlwind of time, eventually waking up on the morning of November 9: as soon as he realizes where he is, the girl runs to look for him to ask for explanations and he tells her that, now, they are both prisoners of a time loop. Inside the loop is also Roy, the man who injured Nyles and who holds him responsible for dragging him with him in this nightmare that is repeated every day: he wants nothing more than to have the opportunity to take revenge. The boy then explains to Sarah that she too will now find herself repeating an unspecified number of times that same day, just as has happened to him for some time, in a situation that seems hopeless and that nothing what he has tried so far has seemed effective in breaking the trap.
“It seems to me that there are a lot of people in this world who don’t think they deserve love or the possibility of having a relationship (…) because they are the first to not like each other. The message of the film is that – hopefully! – this is not the case ».
Andy Samberg
Palm Springs was born as a romantic comedy that incorporates a fantastic / surreal element but aims to be a deeper reflection on relationships and the possibilities that people have to give birth and cultivate them, beyond the classic game about the fate of love tension between the two protagonists.
The space-time loop provided by the plot is not only the excuse to generate gags in abundance or the obstacle that the two main characters encounter on their way but also the way they have to grow, develop and become more defined and more aware. of their goals and what they want to do with their lives, which, as the story of the film continues, turn out to be prey to chance, habit and fear. That, more than a curse, the loop is actually Nyles and Sarah’s biggest chance to change their lives?
As for the cast, in the role of Nyles we find the New York comedian Andy Samberg, a member of the demented complex of Lonely Islands but above all the protagonist of the sitcom Brooklyn Nine-Nine. At his side are Cristin Milioti (the long-awaited “mother” of How I Met Your Mother) and the much-loved Hollywood character J. K. Simmons. Several other important performers come from the world of TV, such as Peter Gallagher, Meredith Hagner, Camila Mendes and Tyler Hoechlin.