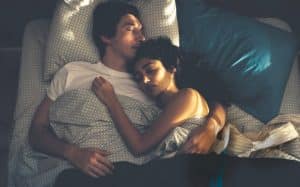 Paterson lives in Paterson, New Jersey, with his wife Laura and Marvin dog. Every day riding the bus through the streets of the city, every night brings out the dog and drinking a beer in the pub of the block. While his wife collects imaginative projects and out of reach, and continuously decorating their home, humbly Paterson pinning his poems in a notebook, which always brings. In his verses combine a passion for William Carlos Williams, a native of Paterson, Ginsberg, O’Hara, but also his daily horizon. Just the gift of a poetic view seems to be what elevates it from a routine of places and actions equal to themselves and subtly distressing.
Very few films dealing with poetry failing to make it’s own substance and this work Jarmusch immediately places itself in the top of the list. Anything but a movie about the poetry of little things, Paterson, on the contrary, a poem in itself, as well as a journey through the same mechanisms of writing in verse and in the relationship between word and image, that inherently calls into question the cinema.
The journey begins immediately and from nothing, from that first call to matches, the protagonists of the most famous and trivialized poetry prévertiana love, and then behold the surprise, an essential element, which looks out here in the appearance of the first pair of twins , generated by a dream of his wife and turned into repetition, which punctuate the film. And then the dog, its real image and the one in the picture, which went through an abstraction process of interpretation and yet preserves, recognizable, the physiognomy. And the good humor of the letter, in which the protagonist’s name coincides with that of the city as well as the actor’s name, Adam Driver, with that of his craft in the film.
By making continuous dialogue with references to the world of things and the words, and using systematically figure delll’anafora (again, both in the repetition of the verses in voice over as the repetition of situations and behaviors) Jarmusch builds a work that makes sense as a whole, and not in a single step, as successful.
Like Dante, he cited not by chance, Paterson shows us what he sees during his run through the city and the existence, puts us apart from the snippets of conversation that feels (good dialogue on Gaetano Bresci and the death penalty given the two protagonists of Moonrise Kingdom, even in pairs, transfigured in neo romantic anarchists), the meetings it does, the impetuous nature of the little unexpected.
Jarmusch does not tell here the story of a misunderstood genius, so much so that the poetry of a girl cross by chance is as good as those of the protagonist or almost tells a gift that has the power to change everything, because it is the gift a particular view of the world.