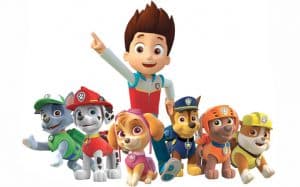 The enterprising Ryder and his band are an unbeatable team because “nothing is scary for a brave puppy”. And as they are not content with the planetary success that they have gained as the protagonists of the Paw Patrol television, now Marshall, Chase, Zuma, Skye, Rubble and Rocky arrive (always headed by the baby Ryder) on the big screen, too early.
Actually, Paw Patrol is not a real movie but a collection of six new episodes, in which the Zampa Patrol saves bear puppies and princesses pursued by dragons, the three piglets and lambs who fled the farm. The format is always the same: Ryder receives a request for help, summon the puppies, explains to them what the day’s mission is and chooses some of the patrol members to give him a specific job. Among other things, the moment of mission display is clearly a prelude to solving the mathematical problems that small viewers will encounter at school: Ryder announces the situation, provides data and suggests the tools to reach the solution. The chosen ones fall into their vehicle, of which the miraculous faculties are visually illustrated, and they are doing the heroic enterprise.
Between a couple of episodes and the next couple there are some curtains where Federica Fontana and a group of children are looking for objects to retrieve, replicating the adventurous format of the series. It is a pity that the objects that children have to retrieve (befana’s stockings, pictures with characters) have been made by marketing and are actually on sale: a really bad product placement and out of place in an otherwise candid and naive movie. The other cardboard Achilles heel is the sound: the tormenton mark is fired at the ball every time the puppies come into action, the characters’ phrases are constantly screaming, and this gives Paw Patrol to the movies an almost unbearable freakish dimension For accompanying adults.
The under 6s for which the film is intended, however, have a lot of fun watching their giant sized heroes, applauding before the puppy’s performances and laughing at their puerile jokes (but here it’s right they are, it’s dramatic when they We find ourselves in the Italian comedies for adults). The authors and the director are obviously tuned to the tastes of the little ones, and here are simple stories illustrated visually and “explained” by Ryder’s rhythm, fast pace, imaginative gadgets, repetition of patrol slogans, team spirit and great enthusiasm Facing really basic businesses.
Note of blame (not for the movie, for the whole series) the presence of only one female puppy on six, and completely pink: if the imagination of children is also formed through cartons, it takes more care not to perpetuate certain stereotypes . Much worse than the cockapoo Skye drives a helicopter and therefore, as he proudly reiterates, he is “the puppy he learned to fly.”