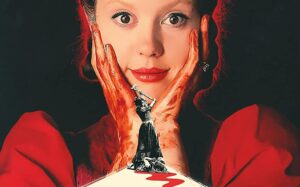 Texas, 1918. Young Pearl lives on her parents’ farm, with her ailing father and an authoritarian and uncompromising mother. Her husband, Howard, left for Europe in the war and it is not known if and when he will return. Increasingly impatient with life on her farm, Pearl shows signs of mental imbalance and a perverse taste in killing animals. A dance audition represents her only hope of a new life, but her mother intends to forbid her from participating.
Born from the success of X – A Sexy Horror Story, Pearl is the bizarre prequel, temporally set almost 60 years earlier, when the killer of X is still a young and restless girl. Typical demonstration of necessity that becomes virtue, given that Ti West makes the film, supported by the ubiquitous A24, reusing the set and part of the cast of X, shot in New Zealand during the Covid-19 pandemic, when the nation was almost the only place in the world free of infections and, therefore, of restrictions.
It is no coincidence that the isolation of the lockdown is the basis of the inspiration that gives life to Pearl and a psychosis generated by a claustrophobic state: a situation with no way out in which dreams of escape and creative ambition are destined to remain unattainable. The choice to set the film in an unusual era for horror leads Ti West to play with the cinematic imagery of the past. Pearl is in fact a chromatic explosion that refers to the era of technicolor and Stanley Donen’s musicals, when Hollywood was the dream factory. It opens on a camera movement that almost seems to mimic Ford’s Wild Paths, to continue with the names of the great actors of the time – Charlie, Francis – assigned by the dreamer Pearl to the farm animals. The striking contrast between this aesthetic choice and the brutality of Pearl’s violent acts is used by West in a grotesque and caricatural key, treading the hand even more than in X on the humorous side of the story, without skimping in terms of gore. Although morally irrecoverable, Pearl’s character thus induces a semblance of empathy, carried out in the sequence of the audition, in which it is impossible, despite everything, not to sympathize with her dream of escape.