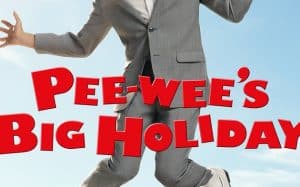 The film, starring Paul Reubens in the role of Pee-Wee. In the film, after a fateful encounter with a mysterious stranger, Pee-wee Herman decides to take the first vacation of his life, in this epic story of friendship and destiny.
In the cast, as well, Paul Reubens, Joe Manganiello (True Blood, Magic Mike XXL), Jessica Pohly (Stalker), Alia shawkat’s and Stephanie Beatriz (Brooklyn Nine-Nine).
The film was directed by John Lee (Wonder Showzen, The Heart She Holler), while Paul Reubens and Paul Rust have worked in the capacity of writers and was produced by Reubens and Judd Apatow (a disaster of A girl, The girlfriends of the bride).