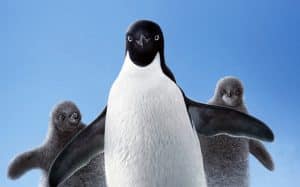 They are funny, harmless, immediately recognizable. They live in a hostile world and their purpose in life is to find a partner, reproduce and live with the family for the rest of their days. With these characteristics of a family animal, to which is added the phisique du rôle as a star of the silent, it is not surprising that the penguin is among the most beloved animals in the cinema. Whether it’s documentaries, live action films or animation, the black and white livery of the bird that doesn’t know how to fly has always been synonymous with tenderness, determination and success at the box office, from Mary Poppins to Penguins, the last born of Disneynature expected soon at Cinema. But it is the early 2000s that marked the beginning of the era of the cine-penguin, with the 2001 documentary The migrant people by Jacques Perrin and especially with the hit La marcia dei pinguini (2005) by Luc Jacquet, Oscar in 2006 as best documentary, followed in 2017 by The March of the Penguins – The call. At the center of Jacquet’s film, narrated in the Italian version by Fiorello, is the march – poetic, real and truly dramatic – of a pair of emperor penguins headed, together with their baby, from the ocean to the ice region.
Even the cartoons have succumbed to the charm of the penguin, and almost at the same time: in 2005 Madagascar was released, a choral film in which three terrible birds stood out (protagonists in 2014 of the penguins of Madagascar spin-off), and in 2006 Happy Feet, the first of a series of animated feature films dedicated to the Mambo penguin and his passion for dancing.
Not all penguins, however, are the same. And if that of the “emperor” type is the undisputed star of the species, almost always chosen as the protagonist for documentaries and films, in the case of Penguins the feathered is of a completely different paste. The species told in the film is the so-called “Adelia” (from the name of the wife of the explorer Jules Dumont d’Urville, who discovered the species in 1840) considered more “selfish” than the others, that is more devoted to individualism than to the logic of group. An example is the singular behavior of some penguins when the pack is found united, on the cliffs, to dive into the water.
An action that is performed by the specimens all together and at the same time, in order to confuse predators waiting in the ocean: for the slower there will be no escape, but the number and mass of the group will allow most penguins to save oneself. A good strategy. Were it not that some of the Adelias have the habit of pretending to jump into the water, then wait for the leopard seals to pounce on the herd. And immerse yourself, quietly, only in games made. Curious as children, friendly and extroverted (features that often cause them to get into trouble), they are monogamous like the emperor penguins, and equal in the management of children between men and women. Their sexual habits, however, are “transversal” and open to homosexual relationships: the “Sexual Habits of the Adélie Penguins” study, written in the late nineteenth century, was judged for the moral of the time “unpublishable”. There are just over three million Adelie penguins in the world, spread across 251 colonies in Antarctica.