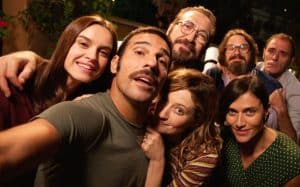 How many couples sfascerebbero if one looked into the other’s cell phone? This is the premise behind the narrative story of a group of old friends who meet for a dinner destined to turn into a game in the massacre. And the word play is perhaps the most important of all, because it is using “fun” new “communication facilitators” – chat, whatsapp, email, sms, selfies, app, t9, skype, social – to reveal the most dangerous nature: the superficiality with which (almost) all entrust their secrets to the black box that is the smartphone (or tablet, or pC) modern believing and thinking of not going to meet the consequences, or even worse, flirting with those consequences to make it more exciting. The “strangers” of Genovese actually known each other a lifetime, you hold up the game and make each other from an early age the game of truth, knowing that funny in certain experiments there is very little. And they are determined not to understand that it is the other’s protection, even from all this, to fill the sense of life.
Paolo Genovese tackles the manner in which the widening of the circles in the water of these “games” ends to reveal the “frangibility” of all: and the very choice of this word to the neologism limit, much linked to the structural delicacy of tools so unreliable and, by their very nature perishable how new media, indicates the seriousness with which the writers’ team has been working on a topic that is little tricky to define, since today is (almost) everyone. For once the number of writers (five in this case, including the same Genovese, not to mention the important work of the actors who have sewn on their dialogue) does not denote chaos and structural weakness, but concerted effort to tell a story which is intrinsically made of fragments (one might say of bits, bytes and pixels), racing to add more and more apt examples drawn from the real.
The script works well on narrative anchors and joints that remain basically credible, instills truth in the dialogues (which certainly will be echoed on social and living room conversations, because this make some “conversations”: the echo), describes recognizable human types. The cast, which also choral, does honor to the text, and each adds to its role a part of themselves, their own real fear. Because this company as well as liquid overflow continuously, submerging our every certainty, is frightening to everyone, and everyone already carry the scars, we have already taken the Boxer position encasing and tries to remain standing (or survive as sings why opening over the opening credits).
The tone is appropriate to the narrative: not melodramatic (in The Last Kiss), not romantically nostalgic (to The name of the child), not farcical, not cynical, but comical at the right point, with sarcastic nuance and pain injections. This “derision” dinner draws very French and American cinema, but the declination of the relations between the diners is Italian, with continual references to a present in which the work is precarious, fragile ties and impossible dreams. Writing is cruel, precise, disenchanted, and has the courage to leave some narrative lines hanging, no television compulsion to close each scene. There is also a queue to Sliding Doors that shows how the “game” (before it gets to the massacre) is only manageable with the hypocrisy and the acceptance of certain unwritten rules: and this is the road most often choose the “breakable” beings.
What is still lacking, on closer inspection, it is to abysmal depths, that of consciousness vertigo donated to viewers without notice from the best Italian cinema, especially the one by Ettore Scola (in fact even here there is a terrace). But this is not the fault of the writers or director, is a sign of the times, since the “frangibility” of identities and relationships allows maximum detection of some false bottom, not the suspension edge of the abyss, as the bard sings of our tenuous times, “it is not afraid to fall but want to fly.”