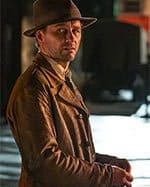 A miniseries produced by Robert Downey Jr, set in the 30s as the stories from which it is taken and which initially saw the star involved as an actor. Matthew Rhys is the protagonist. The cast also includes Tatiana Maslany and the great John Lithgow; directed by Tim Van Patten, one of the most solid directors of HBO for years; to the script Rolin Jones and Ron Fitzgerald.