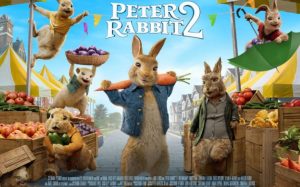 After the success of 2018, Peter Rabbit returns with a new film that is a direct follow-up to the first: Peter Rabbit 2 – A runaway rascal is in fact the second chapter of the film stories of the talking bunny invented by the English writer Beatrix Potter in the early twentieth century.
«Peter’s favorite quality is his inexhaustible self-esteem. Maybe he really needs a lot of time to understand that he has made some mistakes but his real advantage is that when he gets tangled up and makes a mistake, he corrects him in the best possible way ».
James Corden
In this new adventure, Peter struggles to adapt to the new family life with Bea and Thomas, who have since married, and decides to leave his house in the open countryside to try his luck in the city, where he knows an older rabbit and shrewd named Barnabas. He reveals that he knew his father and Peter, decided more than ever to never go back, decides to stay with him and adapt to a new life made up of tricks, tricks and above all freedom.
Two years after the first film adaptation, a revision of the original Potter material modified to be more in line with contemporary and contemporary tastes, a second mixed-media feature film arrives on the adventures of the one who, once, in Italy was known as Peter Coniglio and today, for franchise’s sake, we call Peter Rabbit as it is in the original.