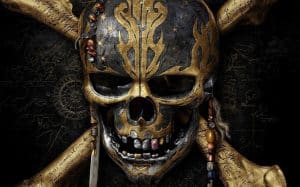 Pirates of the Caribbean- Dead Men Tell No Tales

Not enough idea or a single person to revive a genre that seemed finished in the trunk of memories and make it one of the most successful franchises of all time. It takes a team, in fact, the perfect team.
In putting together the crew that led, at least until now, three films in the series among the 50 highest-grossing titles in film history, was Jerry Bruckheimer, American producer, born in 1943, already responsible for a number of Hollywood blockbusters a team with the late Don Simpson, during the eighties and nineties. Initially, however, Bruckheimer was not interested in producing a classic pirate film that took the moves of the attraction of the Disney park, and was about to give up the project. Instead, managed to turn a page of history at Disney, obtaining for the first time that a family film could afford not to sweeten the scenes and were therefore labeled for a vision under 13 “accompanied” (PG-13). At that point, he began to build the team, from the first brick, that of the script, which he wanted to draw the creators of Shrek and the Mask of Zorro, Ted Elliott and Terry Rossio: a duo remained intact until the fifth chapter, that accredits instead to writing Rossio and Jeff Nathanson. Even when directed, after the three chapters signed Gore Verbinski, who gave the imprint to the series, Rob Marshall, who directed Over Tides, now gives way to the Norwegian Joachim Ronning and Espen Sandberg.
The winning cast, in which the actor and character reinforce one another
But it is with the cast that Pirates of the Caribbean pulls the winning cards, creating a virtuous circle in which actor and character are mutually reinforcing each other. If Keira Knightley has diversified his career doing the brave and beautiful Elizabeth Swann of the saga, the daughter of the governor of Port Royal, a role among others, the speech is different for Orlando Bloom, for whom the character of the blacksmith Will Turner has proved crucial for the fortune and the actor’s recognizability, second, and perhaps only, the elf Legolas that he starred for the ring trilogy by Peter Jackson. Absent in the fourth episode, Beyond the sea borders of 2011, Will / Bloom returns to co-star in the fifth title, Revenge of Salazar, along with his son Henry, found, indeed met for the first time at the age of ten years, after going to the Sparrow company, at world’s End.
However it is Jack Sparrow, he was born as a sidekick Will Turner, to be become a real icon in its own right, the emblem of the saga itself, as well as the inspiration and the protagonist of a whole series of children’s books to him dedicated. Re-reading the legends of the eighteenth-century pirates like so beloved stories of heroes and admired it can be seen as the rock stars of that time, the actor Johnny Depp has taken as a model the most histrionic and pirate of contemporary rock star, the Rolling Stone Keith Richards, and worked on the topic. His captain dazed, a little ‘drunk and very imaginative of his goatee divided into two and the gold teeth, was a real act of faith on the part of Disney, unaccustomed to such daring proposals, but has repaid the parent well beyond the imaginable. For his part, Depp has never proved intolerant compared to the character: on the contrary, he often played to interpret it in life, confusing the waters to be able to move free and a little ‘robber, not only on set but also outside.