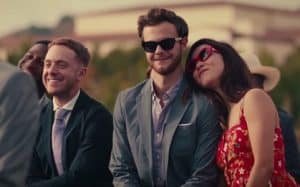 Romantic comedy begins with a collection of wedding toasts that seem to be an example of real life. Settings and speakers are varied, but the mood is the same. There are known jokes about the wedding couple
Ben (Jack Quaid) repeats his best toast to his friend, telling his story to the groom since they were children.
Toast about great love is a blow. But it is too late for the one who said unwittingly, because now he is farther; she is engaged. Ben is embarrassed and alone. And Alice just went through a terrible breakup.
Ben explains to Alice the idea of a “nice encounter,” like when they both reach the same grain at the grocery store and fall instantly in love. But we know and will find that love is risky and that the attraction is instantaneous, but love takes time.