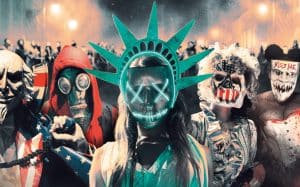 During the American presidential election campaign taking hold protests against the “Judgment Night” that some believe is only a government method of reducing the poor population and the related legal costs. The presidential candidate Senator Charlie Roan – who lived a terrible experience 18 years earlier during one of the first “outbursts” – intends to eliminate the night in which every crime is granted. But the so-called New Founding Fathers, which have introduced it, do not stay with our arms folded. Edwidge argue Owens, a religious rival Charlie, but above all they want to use next Judgment Night to eliminate the rival.
Leo Barnes, star of the previous Anarchy – The Judgment Night, now in charge of security for Charlie Roan and it still occupies more so when it begins the famous night, because he knows that opponents of Senator will try to take advantage of it to take him out. Meanwhile, tourists from around the world come to the US to take part in the fateful night, become a real attraction. Leo verifies that the security measures for the home of Charlie Roan are in place, including snipers on the roof. But when the night begins every certainty is disintegrated and no one is exempt from danger.
If the first film in the series (The night of judgment) was claustrophobic and the second (Anarchy – The night of judgment) was agoraphobic, this third film tries to expand the content and meaning by reflecting on the nature of the dystopian future described to derive a position of philosophical and political (the plot is hard to miss echoes from 1997 – Escape from New York). The intent is commendable, the yield is limited by over-schematic and simplistic in representing the positions at stake, with a portrait of the supporters of “venting” substantially parody, sometimes funny, but not too effective for dramatic purposes. In the end, if the film remains largely enjoyable under the spectacular appearance it is because do not forget to entertain and not surprisingly the best moments are those of pure action (or inaction, waiting) released by the political subtext social that seems mainly an alibi honorable for the frequent display of violence (the old exploitation docet). Of course, the assumption is of special significance, not at random, given the same time as the real US presidential campaign in which we can see how populism and demagoguery have a considerable weight.
Like the previous episode, this is essentially divided into a long breakaway in the city crossed by the wave of violence, unexpected alliances and betrayals. In this sense, as often it happens to the followings, it is a new ration of the same dish. Rhythm and tension are kept at a good level, but the feeling of déjà vu is felt. The vindictive and cathartic violence of “venting” end though the background of political fiction story of the struggle between the candidates, with espionage-conspiracy mold intrigues that show a bit ‘the rope. It is appreciable change in perspective, but a bit ‘pulled for long conducting. The ambitions of finding more “meaning” play against each other in its effectiveness, although it is not entirely trivial insights. Final and final scene is just spot on their own because they are too tied to the conveyance of the message.
James DeMonaco, eager to develop a wider arc than seemed possible in the first episode, it is confirmed that creates a thrilling spectacle and well orchestrated. It helps a cast as always efficient if not famous. Frank Grillo returns in the role, here more professional and less hieratic, hard Leo Barnes and confirm reliable and charismatic actor, although its role in this case is more conventional and generic, less motivated.