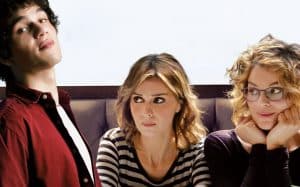 Lucia and Maria have been friends since high school, but could not be more different: Lucia is demanding and rigorous, or as Maria would say, “gufa and spadona”; Maria describes itself as “soft, positive, vibrant,” or, as Lucy would say, “a little ‘bitch’. Even their relationship with men is diametrically opposed: Lucia, seared by an unhappy marriage, has raised a wall and has become a “woman of anyone”; But Mary is a “woman of all” who collects occasional adventures with unlikely partner to the secret right man. A mess cards comes Luca, lover of a night of Mary, 19, and an endless hunger for sex and life experience. The two friends eventually contenderselo, not according to the trite dynamics of the competition “feminine”, but according to an individual research path of their own identity.
It is the reinvention of identity the main key to understanding Something new, based on the piece of theater written and directed for the theater scene by Cristina Comencini, and adapted for the big screen with the collaboration on the screenplay by Giulia Calenda and Paola Cortellesi and flexible mounting Francesca Calvelli. gender identity, first of all, as feminine as masculine, in a present marked by the revolution of the roles and relationships of power, from the disintegration of the traditional family and the economic crisis, and the lack of emotional and sexual education that does not teach as much as you wear a condom, because how we should respect nature and other people’s inclinations, and the freedom of others to be different from us.
Like any well-constructed story (and oiled on the boards of a stage) Something new is also talk of other things: of denied maternity, blackmail, friendly, innocent and generous; female friendship, willing to solidarity but also exposed to the severity of the judgment of one another; the need for women to have beside a man “but also” sweet but also strong, but also including protective, endowed with sensitivity but also assertively virile, tender but muscular. And while women are specialists in being many things together, men seem disoriented from these expectations (apparently) contradictory.
Luke, for example, communicate with peers who seem to know exactly what they want, when the twenty-year old male today hardly know to decide what color to choose the shirt in the morning. The “mature women” Lucia and Maria, however, have already passed the stage in which adhered strictly to their life plans, and also that of the subsequent dismantling of the castle of cards from them built with blunt determination are therefore free to experiment, even with a high school student who uses his hands well and is able to listen. Lucia and Mary begin to tell Luke what they fail to say to themselves, and discover what is being closely the character that have cropped over time.
Cristina Comencini has a special talent for telling the contradictions of the female, touching taboo subjects and defying accusations of sexism that would certainly addressed to a man director on at least two scenes. And the comedy is particularly suited because it allows her to convey uncomfortable questions under the guise of humorous jokes. The melancholy that underpins the whole thing never flows into melodrama, though a bit ‘of bitterness would have been more tolerable even by the most escapist viewer.
Since the alternating initial presentation of the two protagonists, Comencini not content to reproduce his theatrical text within four walls, and those walls indeed the melt, making literally step into each rooms of several homes, because the three lives that tells blend seamlessly following the intimate changes (even more than inner) of the characters. And if the exchange of jokes are sometimes too anchored to the play without daring verbal acrobatics (and physical) of the screwball comedy that something new was born to be, in some monologues of the screenwriters sink the knife in a courageous and moving.
Paola Cortellesi is more effective than Micaela Ramazzotti in designing a character coming out gradually from the stereotype and conquer credibility (and heart), and Eduardo Valdarnini, who has the right physicality for the role, is serving artistic immaturity that comes at the expense, instead of in favor of Luke. But what matters is that these three imperfect humans you love someone, you follow their intricate story suspending disbelief and you are bringing questions which are not easy to answer.