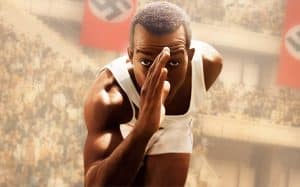 James Cleveland “Jesse” Owens leaves for college, leaving a young daughter, still a girl to marry and the family of origin in uncertain economic conditions. It seems already an achievement, but a few months later, thanks to the coach of Ohio University, Larry Snyder, Jesse gets the call for the Berlin Olympics. It is 1936 and the racial cleansing policy of Hitler divides the American Olympic Committee: to participate or boycott? The African American community face the same problem. Jesse knows one thing: if you go, can not afford to not win.
Director Stephen Hopkins is no stranger to the biography: that of Peter Sellers had infuriated whoever was highly controversial as the people who judged it not quite monstrous. With Race, the double meaning of the title, seems to avoid the risk at the start, giving up the nuances and opting resolutely for a heroic portrait of Owens, from beginning to end, in sports and in life.
On the other hand – it seems to say Hopkins – the character external conflicts are such and so many that still maintain and constantly under pressure. And so it is: the choice of telling the most controversial Olympics of history brings with it a large amount of narrative material, and the director manages aspiring to a classic tale model, that at some point he does well and others less. The desire to remain politically correct (for example by conducting the film on the track parallel to the white coach redemption along with the black sample) reduces, however, the voltage rate, as well as the impression that the beat every record does not cost any effort to Owens , and the image of his repeated primacy, in the white stage that was to magnify the eyes of the world the Third Reich, remains the only groped to restore a balance.
Directed more than anything else, rentier force of history, merely do no harm when it comes to field interpretations of Goebbels and Leni Reifensthal, here cleared as an artist-partisan, well-supported and funded by the Fuhrer but interested in another order ever, the success of his film. Its potentially instrumental athlete’s use of Cleveland, as well as the censorship that the Southern United States worked on the news of Berliners miracles of Jesse Owens, the film does not mention. Race runs to the goal, but the film’s point of view, it’s a little sweaty victory: not the nuances, the souvenir photo is flat.