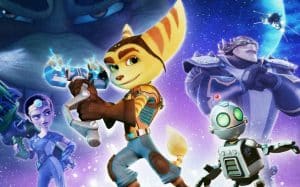 Ratchet is a spatial mechanical, like a lot, who lives in the myth of Captain Qwark, the hero of the Galaxy Ranger leader, a man behind the monumental appearance is actually vile and vain. When a terrible threat, that is, the disappearance of some planets, pushes the Rangers to accept new recruits, Ratchet appears to be beside the idol but it will be discarded. However the meeting with another gap, a malfunctioning robot that just those responsible for the disappearance of the planets have hunted, will create a pair able to win the confidence of all the facts and be able to take part in the great battle for the salvation of galaxy.
Video games when they come to the movies manage to lose all that makes them original in their original location. It is their curse. Ratchet & Clank is just the latest example of an idea that the console has great potential and great originality, but at the moment it is brought to the screen is performed by team of authors definitely not up to par, which transmuted in a mediocre soulless spectacle. Although in this case Ratchet & Clank is a bit ‘more than that, the impression of being faced with a version of “normalized” than that of which you can take advantage of strong console.
Because in this case more than in other animation it is only a little more refined, cured, technical and qualitatively cleaner than experienced in cut scenes gaming. Ratchet & Clank, the film, is proposed in all respects as the logical continuation of the games, it serves the same lights, the same shots, the same color tone and visual style. The scaling factor is then only in the history, in the interactions between characters and times of jokes or gags, much more similar to other animated films to video games. Likely that Kevin Munroe was not just the person for the job, despite an enviable curriculum, for quantity rather than quality, in the field of adaptations (in addition to the Ninja Turtles animated film, TNMT, even Dylan Dog and American film the next Sly Cooper, eponymous video game). Too eager to shoot a conventional film, too willing to recline on the whole already seen in the field of history, way of expressing the conflicts and narrative strategies.
Certainly its extreme visual fidelity video games along with the conventional manner in which the film repeats the clichés of cinema for young people in recent years, are the most powerful weapon in the run-up to the success and satisfaction, but it is also true that if the animation is still one of the testing and border land to the language of film, this film does not know what you’re talking about. Because it is still impossible to believe the usual story of the boy who is not equipped properly estimated by the world around him and yet humbly struggle for the grand final victory, if that does not pass through a development less rhetorical and mince it.
Fortunately, what the film lacks in originality it makes up for with humor by right times. The usual caricature characters (including a villain in an original voiced by Sylvester Stallone) centrate better than the average time of their gags, and even the action sequences reach a standard sufficient to have citizenship in the film series A. The bare minimum to characters that in their video games are just the adventurous dimension of their strong, who used who knows them to evolution, and ran a much more stunning action dimension.