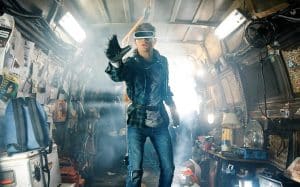 The “Ready Player One” novel by Ernest Cline (in Italy, simply “Player One”) had been selected for a film adaptation even before being released in the US, with lots of fights between the majors that saw the winners of Warner Bros and De Line Pictures. Cline himself wrote the script, which was then reviewed by the most experienced Zak Penn, so in March 2015 Steven Spielberg was announced as producer and director.
Spielberg came to one of the first meetings with Warner Brothers with a copy of the novel marked by 53 Post-It, which indicated the moments of the absent book in the script and which he would have liked to include. It was the best thing that could happen.
Ernest Cline
In just a few months, the cast of the cast of Wade Watts, played by Tye Sheridan, known to the general public as the X-Men Apocalypse Cyclope, but in reality an actor who has already worked with several great directors starting with Terrence Malick with Tree of Life, up to David Gordon Green with Joe and Jeff Nichols with Mud. The role of the villain Nolan Sorrento went to the Australian actor Ben Mendelsohn, a very beloved actor in the indie scene, starting with Animal Kingdom, who has recently been shown to be bad at Star Wars: Rogue One and won an Emmy for the TV series Bloodline.