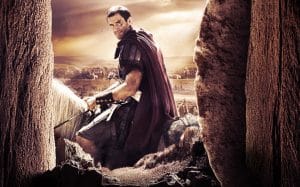 The emperor Tiberius visit to Jerusalem is coming and Pontius Pilate orders the military tribune Clavius ​​to make sure that this Yeshua making proselytes, posing as a king, that he may die, and that his body be supervised to silence the absurd rumors of a possible resurrection. But the body disappears and Clavius ​​opens investigation progressively putting in doubt his confidence in skeptical and do at one point looking for other kinds, question that changed his life.
The idea of ​​approaching the mystery of the resurrection of Christ as the police investigation is not new, in the mid-eighties Damiano Damiani had built there The investigation, from an idea (brilliant, as usual) by Ennio Flaiano, and literature that combines saggismo and narrative has never ceased to exist. But things did not begin in the best way when Kevin Reynolds film opens on a Joseph Fiennes sunburned and escorted by music from western sounds, because it is immediately clear that the tools of cinema could come here used in a way that It serves as the show than anything else. And so it is, more and more, as we are witnessing the magical appearances and disappearances of Jesus, as if we were in a Méliès film: a trick that hampers the film also topic, replacing the leap in the dark with the deus ex Clavius machina technical artifice. If, in fact, in the movie of Damiani, the body image of Christ never appeared, reiterating his absence the permanence of a mystery that has lasted to this day, and allowing the lepers to exchange the investigator to Christ himself, Reynolds film plays with more discoveries and far more mundane ways cards, reducing the skeptic Clavius ​​to a last among the last, and then, to a figure in his own way Christological, but also to the final beneficiary of the hint of encouragement on the shoulder that the Maori Cliff Curtis He bestows its hilarious disciples and his ability to read minds.
Up to where the Inquisition is historical and political matter snarl, the film collects a certain type of interest, and, despite some set design too fake and some useless sketch (the governor Pilate washing his hands), we queued at Clavius ​​horse / Fiennes and follow him until the balance between the presence of the Roman tribune, the fruit of invention, and the story of Scripture hold. The second part, however, opens the most instrumental and incredible use of the Gospel narrative to tell the choice of Clavius, mixing genres and tones and losing in quality and reliability.