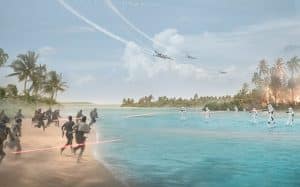 Rogue One: A Star Wars Story

The first film set in the world of Star Wars to not be part of the official canon of the series. The first official spin-off. The first that will not have the characteristic sliding opening credits to disappear. Finally, the first film of the new Star Wars Anthology series (almost a kind of “Stories from the Star Wars world,” stories that take place on the fringes of large plots developed in the main movie). Rogue One is all that and, to kick off as it should, Disney now owns the world Lucasfilm chose a terrific idea.

A single Star Wars line worth an entire movie
At the origin of everything is an inspiration and tenacity of John Knoll, digital effects supervisor of the second trilogy. It is a curiosity that had flashed in his head 10 years ago, but which at the time was not accepted as a subject for a film. Knoll has, however, decided to return to the office a few years later, when Disney took the lead, and it got better.
The plot of the film tells how the rebels came into possession of the Death Star plans. It is a question of deepening what’s behind a single line of the opening of the first film ever released in the series titles, when it is explained that “the plans were stolen.” Who stole them? How did he do? What happened? And above all, how was it possible for them to finish inside R2-D2? Rogue One thus aims to be the most powerful demonstration of the depth that the Star Wars mythology possesses. A universe that has thousands of years behind and in front of him but also a breath that, in the folds of what has already been told, there is scope for many other new stories.
Princess Leia had inserted inside the small robot character all whistles and a help message to Obi-Wan Kenobi, along with it there were these plans. A key package for the rebels, entrusted to a seemingly harmless robots (in two words the hearts of Star Wars). Thanks to the plan illustrated by those plans, at the end of the first film, the rebels will find that there is a point at which to shoot that can lead to the destruction of the Death Star, and Luke Skywalker will take part in the expedition in order to blow up the whole planet-Empire weapon. Lucas added that line to give the idea that his story was part of a larger struggle, the same that we see now staging a movie at a time.

A little ‘back, a bit’ old
At the head of this first spin-off is Gareth Edwards, director he arose light with the great independent film Monsters, and then came the big productions with the Godzilla remake. To him the task of leading a new heroine (it seems that the sign is always more to review the classic adventure parables aimed at men, taking advantage of female figures and the specific that bring with them), played by Felicity Jones. As always there is great secrecy around the plot and the first trailer we could understand that we will find only a few well-known personalities, including, however, the best known of all: Darth Vader.
It is not difficult to understand that this should be the guideline for all films in the Star Wars Anthology: a new story around which orbit the mythology of the old. There are already planned for the coming years other films dedicated to the young Han Solo (when he won the Millennium Falcon to the game? How does the indebtedness with Jabba the Hutt? How did you meet Chewbacca?) Or the adventures of bounty hunter Boba Fett .
In the great project of Disney is in fact the release of a new Star Wars movie every year, at least until the interest in the saga not stupid, that is until you fall collections, which up to that fantasy does not it is totally exhausted, the characters are not so exploited and debased by the repetition that the toy is definitely not ruined at a level such that no one wants to hear about. Also according to this project vintages should alternate, once one of the official fee films (in 2017 it’s up to Episode VIII) and one year a spin-off. No matter how demeaning the prospect of seeing for sure degeneration of Star Wars, sooner or later, it is also true that at the time of the exploration of the mythology with directors, approaches, techniques and writers every time different looks an exciting prospect.