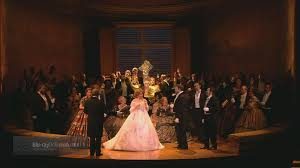 La Traviata is considered one of the finest works of Verdi and the traditional staging of Richard Eyre is one of the most popular productions of the Royal Opera House. It is the story of a Parisian courtesan Violetta Valery, one of the great heroines of opera history, that is inspired by the story of the courtesan Marie Duplessis, who died in 1847, at the age of 23 years. In this staging, Violetta has the voice of the Russian soprano Venera Grimadieva, which debuted at the Royal Opera House after the successful appearance, again in the role of Violetta, the Glyndebourne Festival.