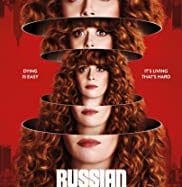 Nadia is an uninhibited woman from New York, an affirmed programmer who, after leaving a man who has thrown her into her marriage, does not seem to want demanding relationships. From his birthday party he returns home with Mike, a professor who in turn seems mostly interested in casual sex. The next day, again on the street, he sees his cat who for some time had disappeared and crosses without looking to the side, ending up run over. Instead of dying, she suddenly finds herself once again at her birthday party and from that moment, as she elaborates theories and looks for answers, various fatal accidents occur that always bring her back to the starting point. Things get complicated when he crosses a man who seems to live in his own condition, but with a completely different attitude.
As in a serial and female version of Ricomincio da capo, Russian Doll sees the protagonist trapped in a sort of metaphysical trap. Its growing exasperation makes it more fun, sarcastic and outspoken than ever at the beginning, but progressively the series also becomes dramatic, causing more or less repressed traumas of the past to re-emerge.
The mix of registers, which also touches on the horror at the end, however, escapes the authors’ hand (Amy Poehler, Leslye Headland and Natasha Lyonne, also protagonist) and there is a wave-like and indecisive series, which in an attempt to follow various tracks ends to leave numerous unfinished subplots – and not for lack of space. In fact, there are at least two more or less digressive central episodes because the characters, who have accepted their condition by now, prefer to focus on improbable personal goals rather than referring to each other the most alarming signals they must have noticed. Like the disappearance of a fish from the aquarium or the organic elements, such as flowers and fruit, which perish already at least half of the season but which can only be talked about in the last few episodes.
To which we ask ourselves: “if they do not take this situation seriously, why should we do it?” You might as well have fun in the most funny situations, but even these, after the first two crackling episodes, begin to go into hiding and with the arrival of the co-star, Nadia is joined by a rigid and introverted man, more plaintive than likeable. And that for another is not duly deepened: if a past trauma re-emerges from Nadia, in the case of him there seems to be nothing analogous, so much so that their relationship is ultimately inexplicable. The cast, however, does everything possible to keep a story upset like this and if Natasha Lyonne carves out the lion’s share, Jeremy Bobb (recently seen also in the excellent Escape at Dannemora) is really a done and finished bastard who doesn’t he hides it for nothing, as rarely seen on TV.
Even the slowness of placing one’s situation leaves one perplexed, given that the protagonist is openly geeks and attends an environment where her drug dealer invents a password like “Jodorowsky Dune”, yet he doesn’t realize that his situation is the same as a cult as Ricomincio da capo (or Greetings for your death). The recursion of his life is rather tenuously linked to his very difficult videogame of some years before, so impossible that not even she manages to finish it. Even the relationship between Nadia’s game and past remains only a veiled suggestion, whose in-depth analysis may have been postponed to a possible upcoming season. Just as his mother’s madness, played by Chloë Sevigny, enters the scene late and is not resolved except by a rather generic catharsis, more comfortable than convincing.
Russian Doll holds on the direction front, signed by Leslye Headland, comedy veteran Jamie Babbit and Lyonne herself in the last episode, which is also the most visually suggestive and structured one. In writing instead the experiment shows the rope, perhaps due to excessive ambition, perhaps due to confusion, perhaps more simply for not having wanted to reveal all the cards in the first season. The ending, on the other hand, has all the appearance of a conclusion, but precisely for this reason, thinking about it even a moment comes immediately to mind, as a sort of unpleasant aftertaste, all the points left pending or enveloped.