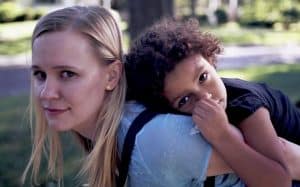 After an accidental pregnancy has turned into an abortion, a nanny discovers an unlikely friendship with a six-year-old child in charge of protection.
Bridget (Kelly O’Sullivan) begins her summer with an abortion. She chooses not to talk about it. The film depicts his abortion in a way that we really don’t see in other films. Yes, it’s a very big decision, but one that doesn’t have to be pulled into the whole movie. The fact that it’s happening from the start means we’re turning our attention to how Bridget is recovering .
Shortly after the surgical procedure, Bridget begins working as a nanny for Frances (Ramona Edith-Williams). Meanwhile, recovery is taking longer than expected. Other movies and TV shows do not really present the side effects that come with an abortion. Saint Frances is not retiring from work. While she is not a fan of Bridget at first, they go on a journey together. When Bridget starts fighting Frances, things get tense between Annie (Lily Mojekwu) and Maya (Charin Alvarez) after the birth of their son . Maya deals with post-partum depression, while Annie works all day.