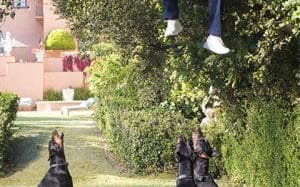 The film follows the vicissitudes of Sandy Wexler (Adam Sandler), a talent manager active in Los Angeles in the 90s who zealously represents a group of eccentric customers on the edge of the show business. His absolute devotion is put to the test when he falls in love with his latest client, Courtney Clarke (Academy Award® winner and Grammy® winner Jennifer Hudson), a singer with the amazing talent he meets in a funfair.