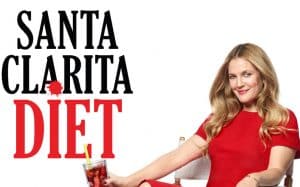 Joel and Sheila are husband and wife, real estate agents who lead a vaguely unsatisfying lives in the suburb of Santa Clarita in Los Angeles with their daughter Abby teenager. That was until Sheila goes through a drastic change, bringing the whole family along a path of death and destruction … in a good way!