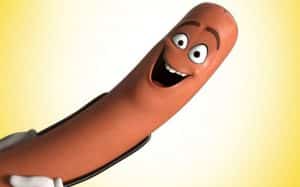 It breathes the Independence Day eve air between the shelves of any supermarket in any American city. People are hurrying to the accumulation of the worst junk food designed to prepare fat and tasty barbeque. Protagonists of the scene of the July 4th are, of course, industrial doses of Fancy Dogs sausages, sandwiches Glamorous Buns, tacos and beers at will, all dancing in all kinds of sauce flavors and creative colors. If humanity is going out of the gates to await the opening of the market, those who “live” pre-taste the plunge corridors that would open the gates of the “Great Beyond”, a heavenly place where legend has it that the products end up after being purchased by humans. No one knows whence comes the rumor, nor has ever experienced, but there is no food that dares questioning its veracity. Among these was the sausage Frank and his love, the “panina” Brenda that they can not wait one to “enter” in the other, with their companions of the pack, and a variety of vegetables, cheeses, drinks and so on . After “run” the propitiatory ritual and joyous song store opening are preparing to welcome the guests, hoping to end up in some shopping that will lead them nell’agognato Great Beyond …
Outside South Park extreme irreverence lives just to Sausage Party, only one – so far – CGI animated movie forbidden for children to “live objects” and speakers who wish to mate and to participate, where possible, to goderecce impromptu orgies. The madness of the most irreverent creators that this work is revealed gradually succeeded in its development: initially, in fact, The Secret Life of a sausage comes as yet another text denounces the reckless spending made in the USA, peppered with jokes a bit ‘ vulgar to attract a younger audience and possibly cool. To that effect it would be (become) a politically correct film and instead the intention of the three dissimulatrice unscrupulous comedian Seth Rogen, Evan Goldberg and Jonah Hill lies in maintaining the intent secretly and well-sealed and then let it explode like a time bomb. The three friendly authors – also of course voice actors of some characters invented by them – have regrouped in the project voices and “accents” known and dear to fellow spectators, thereby intensifying a comic effect, of course, remain unknown to the public who should not have access to original version of the film.
With the progress of the narrative, therefore, the device prepares to break out in every sense: from the sexual innuendo present immediately in Frank courtship Brenda, to the presentation of the antagonist of our heroes embodied nothing less than a vaginal lavage who wants to take revenge against the sausages for a wound accused falling from the cart due to an accident from them procovato. In contemporary cinema no mind “normal” had dared conceive of an anti-hero in the form of a female intimate object of this sophistication, not only the metaphor of cleansing ante-post coital becomes evident, but also that of social conflict between the People’s Dem-sausage and bourgeois-Republican lavender.
Clearly the mob wins and an orgiastic style flash mob choreography of rare size makes its way. If the inventions are inevitably brilliant – from non-perishable products disguised as Native Americans who smoke peyote and “know the truth”, the only human being on which focuses a scene represented by a young poisonous able to perceive objects Fourth Dimension speakers thanks to drugs, until all’impersonificazione of a chewing gum chewed and for that “disabled” but brilliant and so similar to the physicist Stephen Hawkin – the overall result of the project is nowhere near as good, because just in the script plots show a repetitiveness that It does not help to support the potentially amazing quality of the “game”.