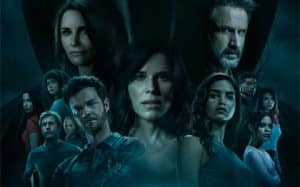 Twenty-five years after the heinous murders, Ghostface returns to terrorize the town of Woodsboro. Tara is alone in the house and is texting with a friend on the phone when she receives a mysterious phone call. Her voice is that of a stranger who puts her in front of a deadly quiz: if she doesn’t exactly answer questions about Stab’s horror saga, now in its eighth episode, her friend will die. She manages to miraculously save herself from the fury of the killer who meanwhile had entered the house and is hospitalized where she is joined by her sister Sam, accompanied by her boyfriend, who reveals a dark secret from the past. As Ghostface returns to action to terrorize a group of Tara’s teenage friends, Sam enlists the help of old Sheriff Linus Riley who has already been stabbed nine times. And with him also Sidney Prescott, survivor of the previous massacres and the journalist Gale Weathers, are back in action to try to interrupt the chain of killers and find out who is hiding behind the mask of Ghostface this time.

“It’s happening again.” So Linus calls Sidney to get her back to Woodsboro. Scream is a full-fledged sequel. Missing only the number 5 on the title even if it wants to be defined as a “requel” (reboot-slash-sequel).

It starts off like the first cult film of 1996 that inaugurated the saga signed by Wes Craven (director) and Kevin Williamson (screenwriter) who in this new version appears as executive producer. There are no more VHS and the favorite horror is no longer Halloween as in the case of high school student Casey Becker, then played by Drew Barrymore but this time there are Babadook, The Witch and It Follows.

The game between fiction and reality maintains its surprising effectiveness not only in the quotes from the films (where there is also the homage to Hitchcock with the Psyco shower) but also in one of the decisive moments of the film in which the scene that a girl , Mindy, she’s watching on TV, it’s similar to what’s happening behind her back.

The spirit of Craven’s four films has remained intact. On the one hand, the new Scream is a tribute to the great director who died in 2015 and a nostalgia operation just like Ghostbusters: Legacy especially when it brings back David Arquette, Neve Campbell and Courteney Cox. On the other hand, it’s a return to 90s horror with that mix of action, terror and irony in the teasing of the film franchise in the film Stab.

Between blades stuck in the throat and disturbing visions from the past, Scream is the example of what a horror has to do: it keeps you glued to the screen without pauses and makes you jump from the chair.