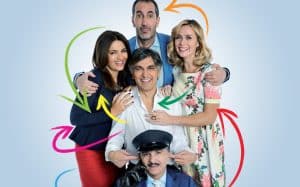 Vincent and Paul were left by their companions, Sara and Federica, and are in pieces. Meet by chance, recognizing in each other the same discouragement, and decide to take it out to the two former: Vincenzo will fall in love Federica himself, and Paul will do the same with Sara, after which the two proceed synchronously to abandon their achievements, breaking their hearts. But not everything goes as it should, because it gets in the way Alberto, a penniless actor who agrees to play the role of the driver of Vincenzo and then not satisfied with the part to be subordinate.
Salemme director brings to the film a subject written by himself together with Paolo Genovese and Martin Coli (not very original: just think of Strangers on a Train) and dramatized turning it into a comedy of errors by the theatrical taste. More: in the hands of Salemme, If you leave me not worth it becomes (also) a metaphor for the theater and enjoyed a reflection on the actor’s craft, from the times of acting as the key to the success of an ego play by certain interpreters that turn every conversation into a monologue (a genuine gesture of self-irony, the Neapolitan author). They escape several irreverent jokes against the actors who take themselves too seriously, like: “You have to get into character? Open the door, and enter”, and the eagerness of certain interpreters hungry for recognition of “clean up” by their regional accent (except then fall into them again soon lose his temper).
Work well especially the interludes between Salemme and Carlo Buccirosso, who plays Alberto, reminding you of Eduardo lesson, and the final triptych, starring also Tosca D’Aquino (Federica), it is a small lesson Neapolitan theatricality. But also it works well the couple Calabresi-Autieri (Paul and Sara), which travels across the strings of tenderness and effortlessly incorporates Romanità him, wrapped in the cozy and bright Neapolitan her. Cameo Carlo Giuffre in the shoes of Paul’s father closes the circle, adding a touch of class to the whole charade.
The story row away fast making them forget some implausibility (first of all the initial pairs Vincent-Paul-Sara and Federica), the jokes are well written, the pleasant and credible actors just enough because this comedy to rise above the standard contemporary Italian, and bring out the audience hall with a smile instead of a grimace of disappointment.