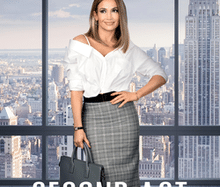 Maya is forty, of which fifteen have gone to a Queens hypermarket as a shop assistant. The time of promotion seems to have arrived for her, but her qualifications are not comparable to those of younger managers. In the midst of an existential crisis, she is helped by her historical friends to build a new “digital” life in which her education and her experiences seem more suitable for the work of a consultant in a large cosmetics company. Once conquered the work of his dreams will have to deal with his lies and ghosts of the past that come back to torment her, until she finds out that this winding road will lead her to serenity.
No one better than Jennifer Lopez (who is incredibly a decade older than her character) could better interpret this story to Cinderella.
For a moment the brace of actress action is closed, the “Jenny from the block” returns to its origins with what seems to be a parable written specifically for her. Then, at the beginning, we forgive the film some oversimplification on the contemporary awareness of a woman of wanting to own a well-paid and personally rewarding job, also sacrificing the family and the possibility of being a mother.
The age complex can also take a back seat, a very delicate subject, especially on the female front. Everything is set aside with the hope that the film will respect the conditions on paper: those of a light comedy that superficially manages to touch urgent subjects of current events.
After passing the first part, these hopes fall dramatically with a choice of script (very unrealistic) that shuffles all the cards on the table and transforms the story of the protagonist in a career in a family drama that leads the figure of the woman in that forced mother .