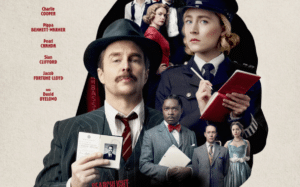 See How They Run

In London’s West End of the 1950s, plans for a film version of a successful play come to a halt after the murder of a key member of the crew. When Inspector Stoppard and zealous recruit Constable Stalker take the case in hand, the two find themselves drawn into an enigmatic mystery within the sordid and fascinating world behind the scenes of the theater, investigating the mysterious murder at their peril.