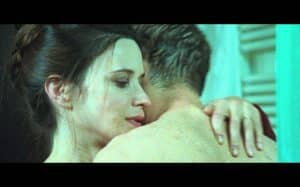 Bruno is seriously ill with a disease that has ancient origins linked to a traumatic event in the past. His wife Elena tries to be near him but is not allowed to cross the wall that Bruno has erected to protect the horror and shame. But fate has it that Elena is involved by restoring an old painting in the place in which it occurred the traumatic event that has revolutionized the life of her husband, who will choose to follow it without alert you that a set plan in mind.
Gianclaudio Cappai debuts at feature film after the success of the short Provided you feel buried, winner at the Turin Film Festival, and after the short feature I know there is a man. Cappai has a hand directing happy and a great ability to create atmospheres (in this case disturbing) using good spaces, with a focus on agricultural and industrial architecture that makes up the fabric (even aesthetic) of our country. However directorial skill does not match an equally effective storytelling, and the plot raises several concerns. In particular the character of Elena seems to be a pretext, a ploy to bring Bruno to his roots but keeps his wife inexplicably far from the scene where the drama unfolds.
Cappai engages with the Italian film noir fueling the current wisely is rediscovering genres, but can not ignore the existence of an entire international trend of “revenge film” that already has his masters in authors such as Park Chan-wook, especially skilled in building scripts that work like clockwork contraptions. The quartet of performers is very effective (and well-directed) but their motivations and their narrative arc are not sufficiently developed. By contrast Cappai is extremely evocative in creating (assisted by set designer Alessandro Bertozzi) an original habitats for its characters, which includes a Dantesque furnace capable of reconciling Italian craftsmanship and universal Mephistopheles instincts, because some people are “evil from the birth”.
Even the fire metaphor, such as anger and resentment, is fed to continue to consume the souls of the damned is cinematically interesting. If for the next feature (because the director is definitely worth other occasions) Cappai will build a script to match its visual insights he will be rewarded by the public and critics.