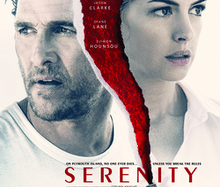 The mysterious past of the captain of a fishing boat comes back to haunt him. His life in the Caribbean is distorted, trapping him in a new reality that may not be what it seems.
It’s a new drama written and directed by Peaky Blinders creator Steven Knight.
It is not impossible to make a drama film .
Critics have already drawn parallels with Collateral Beauty and Henry’s book – two other dramas that had big Hollywood stars and surrounded by awards, whose melodramas proved to be the fundamental flaw that led to their failure.