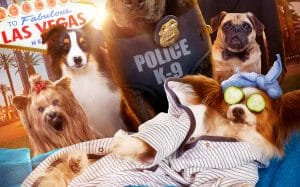 Max is an exceptional agent, a trained police dog, a favorite of three pigeons, used to getting by himself. One night, at the port, he comes across the kidnapping of a panda puppy and the FBI agent who is investigating the case. Between Max and the human Frank is not love at first sight, but the commissioner does not hear reasons and mates them: they will participate undercover at a prestigious dog show at the Caesar’s Palace in Las Vegas and will unleash the illegal smuggling of rare animals.
The couple cops on two legs and a police dog has made the history of cinema and television but does not know tiredness.
In this spy comedy she remembers with affection Turner and the casinaro and jokes (the dog jokes, to tell the truth) about who is the casinaro at this tour. It is not just a joke.
The Neapolitan accent of Rottweiler Max, his charisma as a navigational detective and his tour of admirers of all kinds (from Carly to pigeons who aspire to support him by air) are well positioned, functional, but they do not reserve surprises. The most interesting variable is the choice of Will Arnett for the role of Frank. Arnett is not a matador, nor is his understatement synonymous with calm and security. Wanting to resume the definition that Max gives of himself, even Frank could be called a “crossroad of charm and mystery”, but they are the charm of the neurosis and the mystery of what he does there.
Pleasantly employed in other and different roles, Arnett has never really taken off the character of Gob Bluth, his embarrassment and his touch of madness. Too bad that the script of Show Dogs never gives him the right opportunity, preferring to keep the limelight on the four-legged characters. The film is easily (and nobly) linked to initiatives in favor of the defense of animals, both those threatened by smuggling as those slaves of the botox mania (of their crazy masters), but it is in Felipe’s figurine, a Papillon with moist eyes and from the broken heart, which peeps, behind the speck, the idea that the pursuit of prizes and money compels the best friends of man to a … dog life, ignoring the feelings and incredible loyalty.