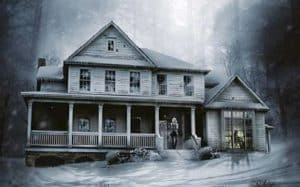 Maine. In a serious car crash, Mary Portman’s childhood psychologist loses her life and her godson Stephen is paralyzed. Mary chooses to take care of Stephen and to pursue her profession, getting more and more isolated from the outside world. She is particularly interested in the case of a patient, Tom, a gifted kid, and difficult childhood. Tom comes to Mary’s house but then disappears into nothingness. From that day the doctor is tormented by nightmares and visions.
In an event similar to the Razzie Awards, Oscar for the worst movies of the year, was titled to Canadian actor Oliver Platt an ironic prize on accepting uncritically every role, named “Another movie and you we no longer want know”. In the cast of Shut in there is Oliver Platt. But perhaps he was not so convinced of Christina Hodson’s script. Which very obviously delivers his fortunes to a single shot and seeks the way to arrive at that point with nearly an hour of emotional growth. The latter for director Farren Blackburn translates into a continuous postponement of the action, in which basically nothing happens at the narrative level: only some sporadic fright, offered through a single solution, that of the sudden entry of a character , Accompanied by deafening music. After a dozen times, this escamotage only produces tedio. When the sighing of the scene is manifested, also anticipated by the most thrilling thriller viewer, the boredom is replaced by the involuntary comedian.
Blackburn and Hodson are no problem in directly using Stanley Kubrick’s Shining script: snow that complicates things but helps to confuse the traces, the stranger who comes to rescue to be sacrificed, the sick relationships within A family that has separated itself from society and reality. It is a shame that everyone has seen Kubrick’s film and no one plays what he sees as a “tribute”, rather than a plunder.
An apparently skittish, sub-television production (Blackburn from there comes and will be back), which is amazed by the presence of an Naomi Watts potential actress. At risk of typecasting Room Jacob Tremblay’s baby.