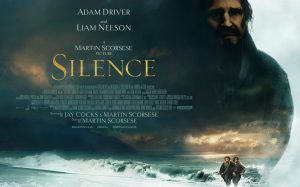 1633. Two young Jesuits, Father Rodrigues and Father Garupe, refuse to believe the news that their spiritual master, Father Ferreira, left for Japan with the mission to convert the people to Christianity, he has committed apostasy, or has renounced his faith leaving it in a definitive way. They therefore decide to leave for the Far East, knowing that in Japan are fiercely persecuted Christians and anyone who also possesses only a symbol of faith import is subjected to the most cruel tortures. Once you get will guide how unlikely the Kichijiro farmer, a drunk who has repeatedly betrayed the Christians, despite having embraced their beliefs.

The slowness in the materialisation of the project is derived not only from the many production problems and defections of the cast (which once included Daniel Day-Lewis and Benicio del Toro) but above all by the fact that, as he stated himself, the director was not ready to engage so directly with the theme that is most dear: man’s relationship with faith. A theme that had already explicitly addressed in at least two films, The Last Temptation of Christ and Kundun, but on closer underlies all his work.