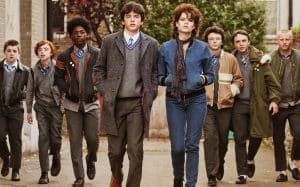 Conor lives in Dublin mid-80s, he is 16 and a talent in writing songs. The meeting with the aspiring model Raphina, which falls madly in love, led him to found a pop band to attract the girl as a video clip actress. Meanwhile, the parents’ marriage falls apart: will the music, love and stainless relationship with older brother to give the boy a courage that he did not believe possible.
While the Brit pop exploded in the world and London was the place to be, adolescents, and young Irish people felt inevitably peripheral. The only dream was to sail to the English coast, and being swallowed by the stalls and crowded pub in Camden Town. In that atmosphere decadent but dreamer, the Dubliner John Carney had roughly the same age as Conor. Easy to believe that acoustic guitar that the boy tinkers still insecure as a tool to not hear parents arguing it was similar to his own, as his was a conscious passion for rock music performed by Brendan, the big brother “philosopher.”
Director musical pedigree, Carney we loved opera Once, appreciated Everything can change, but it is with Sing Street to touch heaven, of course, in general teen-romance-musical-dramedy. In fact it is difficult to find similar balance of lightness and depth in the rich while the contemporary scene of the film on / for teens. Reworking its know-how on the 80 in the round and vibrant Anglo-Saxon tradition of the Bildungsroman joined the musical, Carney succeeds in the great little miracle to compose a fun and clever ensemble, rich in musical-narrative you found that they mimicked cult band era which imitates sound and look adapted to the freshness of cute and naive teenager. No coincidence that the group they created is called Sing Street, where the road becomes the stage primitive, their human fitness and educational.
“I am a Futurist” (I am a futurist) is so determined to repeat Conor in his miserable “brown shoes”, totally oblivious to the cultural connotations that you self-attributes, but it is clear that he and his friends think over and despite themselves to a future elsewhere, certainly different from the families they come from. Sing Street runs in his time as best it could not, and loves showing immature but sincere, hopes intact and crazy dreams, navigates safely through the turbulent waters of adolescence. Commendable the cast, especially the young protagonist Ferdia Walsh-Peelo.