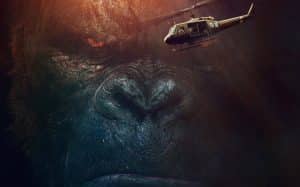 Has nothing to do Peter Jackson’s film has nothing to do neither the recent craze for monster movie (actually yes, it does, but more probably at the production level), the new version of King Kong has a bully do and a bully, has not much to hide and was immediately put in the light for a certain narrowness required, as well as for visual of great power choices. This is a film that wants to tap into the original to go to parry elsewhere.
In the ’33 movie there were two souls in furious fight, which created the epic adventure of the ape trend: one is delicate and poetic, the beauty who kills the beast, the delicate sentiment born of the contrast between the ape (a After literally so) and the girl with the destroyed clothes, wet from the waterfall; the other is the violence, the brutality of a giant creature that knocks down monsters and the dictatorship of the civilization of skyscrapers and asphalt that turns on him (after he rebelled against their chains).
Between these two souls Kong: Skull Island seems determined to pursue the latter. From the early posters that look to the great war film years ’60 and ’70, putting soldiers from unfastened helmet like Lee Marvin in formation like Platoon, illuminated by color Apocalypse Now !, it is clear that at least a good part of the film will be on the island and that if there is also the city that will play a minor role.
This time the story is a variation on the original, there is always a man who goes to the island offending without really knowing what to find but the reason is not because more artistic family: retrieve your brother ended up there in search of a mysterious serum can cure all diseases. It is precisely during the expedition begin the strange encounters.
Tom Hiddleston on the one hand, Brie Larson on the other, plus a small platoon of great character actors to act as a rhythm section, a string of names from B movie cleaned up for the series A as Samuel L. Jackson, when to do performance never fails, John Goodman to John C. Reilly (the most underrated of the second lines). In total contrast with the modern idea of ​​fantasy films, one for which we must always keep one foot in the plausible trying to give as much substance and bases can be to their fantasies, Kong presents an ape that walks on two feet rather than four as he had him do (more correctly) Peter Jackson. fantasy figure and dynamics of fantasy, the director Jordan Vogt-Roberts was categorical about this. Its Kong will be like the original one, implausible and fantastic, can then take all the freedoms that want because they do not behave like real apes. It will be a kind of sad and angry ruler, who wanders sad and angry in an island that sees it as a twilight God.
Even more ambitious is the desire not to bow to the existing myths (the aforementioned and betrayed Beauty and the Beast) to look for something new, tell, as has been said, the clash between human beings and that chain food to which we have escaped millennia ago thanks to the intellect and the opposable thumb. This will be evident from the start, it was promised, since the creature will be shown without hesitation in the first few scenes. Instead of hiding it as we have always done, creating tension and alluding to its shape and on his arrival, Kong will put into play almost immediately.