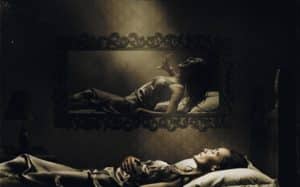 As a child, Alice witnessed the death of her somnambulous little brother, prey to strange visions. Now Alice, a happy family mother, is a doctor and deals with sleep disorders in a specialized hospital. A very troubled family, the Morgan, comes to ask for his professional help. One of their children died in his sleep and another, Daniel, walks and talks in his sleep, sometimes screams. But the whole family, including Daniel’s little sister, suffers from sleep disorders. Alice sees again in the little Daniel symptoms similar to those of her little brother and she is disturbed. She also begins to have sleep disorders and sleepwalking crisis. Morgan’s sleep observation begins in the aseptic hospital climate. There is trust, but Daniel fears that something that upsets him, that monster, come back. And indeed. The cleaner, who unravels a complicated situation, quits worried and tells Alice to let the Morgan lose if he does not want to go to meet something terrible: according to him, in fact, the culprit is a mysterious sleep demon. But Alice wants to go to the bottom.
The dream universe has always been fertile ground for horror cinema. Dreams and nightmares allow us to represent an imaginary macabre and striking with a certain effect: the irruption of the dream into reality and vice versa – with uncertain and jagged boundaries – has suggested over the years visionary concepts of great impact. On all, just remember the Freddy Krueger from the Nightmare series.
In the case of this film the approach is less direct, according to the old and always valid principle that the less we see and the greater the restlessness: the “monster” is more elusive and elusive, it could even not be there. References to Füssli’s painting suggest a persuasive conception, linked to ancestral fears: sleep is in fact a sort of momentary abandonment to something that resembles death and awakening is not so obvious. From this point of view the film works and in more than a few moments manages to keep the tension high, thanks also to a good management of the jump scares. Less valid is the management of the story in terms of credibility, especially in the behavior of the characters, which more than sometimes is reported as incongruous (starting from the fact that to be a hospital where you must observe the behavior of patients during sleep, there are a few too many distractions). Even the inclusion of colorful characters – almost as a function of comic relief – as the grandfather of the cleaner, with flatly display functions first and later deus ex machina, harms a bit ‘to the dramatic force of the story.
The debutant Jonathan Hopkins shows good qualities especially in the creation of a dark and obsessive climate, in which every solution seems impossible: in some moments he is also good at painting the surreal and obsessive frenzy of dreams that turn into nightmares, while elsewhere he moves on more predictable tracks, always with discrete directing skills. The final solution is not surprising (better, this time, the sub-final), but you can appreciate the conciseness of the film, which is not lost in lengths and maintains a good rhythm.