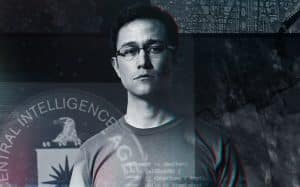 In 2013, holed up in a hotel room in Hong Kong, the twenty-nine Edward Snowden, former coach of the CIA and the NSA computer consultant, revealed, sensitive data in hand, the British newspaper The Guardian and documentary filmmaker Laura Poitras, l ‘ existence of different mass surveillance programs, kept secret intelligence programs, which guarantee the US government an extremely invasive monitoring level and against any privacy rights on its territory and the rest of the world, passed with the security excuse.
The case Snowden, with its stretches of abuse and paranoia, seemed made to end in a film by Oliver Stone and in many ways is actually located in the right place. First, the biography is a genre that in Stone succeeds well, especially because, where there is a true story and a known history, can indulge themselves in the stage that most intrigues him, namely the assembly. Then in the parable Snowden was there, ready and waiting, the voluntary military training speech, which goes hand in hand with the question about patriotism as a backdrop in many films of the director of JFK (who is more faithful to the spirit American: those who dispute or who obeys?). Finally, the issue of corruption, the hostage money politics (and therefore of the war), in a country where you do not look for the truth, but you try to hide it. Stone is obsessed with this issue, but it is no less obsessed Snowden himself, who enlists to live up to the motto of the special forces “De oppressed liber” which does what he does because what he has seen is against any (its) principle and he wants to interrogate the world on the subject. Ideology and action, in short, are the ingredients of which are made much the case Snowden that the Stone movie and this is no coincidence that holds up the film despite not all moments are at the same level.
Another good reason by the name of Joseph Gordon-Levitt. The actor’s performance prevents the director from the risk of overdoing it: his interpretation shifts the ideological discourse by the potential level of that of the individual political choice, conscience, projecting suddenly the little computer whiz in the ranks of the men who made History , the individual who moved the mountain. It is reading the Snowden mystery that makes Stone, a personal reading, but the evidence of Gordon-Levitt supports it without breaking down.
Technically, Stone has refined perhaps more than anyone else the practice of dramatization of real events, so just pick up the baton of Poitras, with a passage of literal hands of the camera, and then take charge of building at will. And here is some problem, the supposed innocence of Edward “Snow White” seems forced, the history of love of service, the metaphors of hunting and drone no paper thin. But the film does not come out compromise because what works is at the bottom of the base, the coincidence between the director’s vision and that of the protagonist, who look with horror to the idea that, like a bomb that hit a target kills all of the innocent civilians nearby, the collateral damage of the American war for control of the information could prove incalculable.