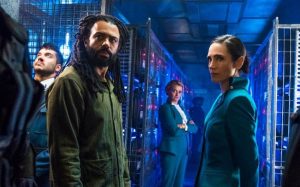 The dystopian future of Snowpiercer, a science fiction film produced by Park Chan-wook set on a train that speeds through the ice of a world destroyed by a new ice age, becomes a series.
After the Earth has become too cold to host humanity, some survivors live on a train whose compartments are divided according to the social status of the guests.