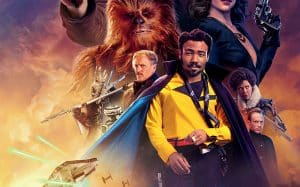 Hard times for the Galaxy, dark forces plot in the shadows and threaten the Republic. But Ian is still too young to deal with the causes of adults. The only thing he really wants is to pilot a spaceship to escape the oppression with Qi’ra, the girl he loves. Intrepid and shameless, it has a character to sell and the courage to try but in the escape something goes wrong and fate separates it from Qi’ra. Ian recruits as a pilot, earns the surname and promises to come back to get it. Because he has a character to sell and a wookiee friend who helps him in the business. Deserter for love and then thief, cheater and smuggler, he wins the Millennium Falcon cards and learns the rules of the game on the field.
It is a risky practice that of episodes and spin-offs, which can not be satisfied with being just good films but must reassure the intransigent army of fans watching over the saga of Georges Lucas.
From first-time fanatics to newcomers for whom the next film will always be the first in the series, from the disquiet of the prequel trilogy to the shareholders of Disney who hope to see the billions of dollars invested justified. In the middle, in a galaxy far enough away, there are artists who do what they can by trying not to surrender to the dark side and to re-establish order (of good). Each with his personality, his style and a childish love for his heroes that goes back in time. After J. J. Abrams (Star Wars: The Awakening of the Force), Gareth Edwards (Rogue One) and Rian Johnson (Star Wars: The Last Jedi) is the turn of Ron Howard to find something to tell and the best way to do it.
Located chronologically before Star Wars Episode IV – A New Hope, Solo: A Star Wars Story is dedicated to the youth of Ian Solo, the legendary smuggler played by Harrison Ford. Spin-off, in the manner of Rogue One, a standalone story announced in 2016 as the first in an endless series, Solo is an inert blockbuster that scratches the surface like the Millennium Falcon in an emergency landing.
Without ever sinking the hands (or even the heart) in the spatial mythology in which they have drawn with creative and voracious inspiration his predecessors, the writers advance the action with laser blows and stolen kisses, writing a conventional story without any push epic or any narrative effectiveness. Ian’s transgression, that of George Lucas and Harrison Ford, is of another order. Ron Howard ignores him merely by perpetuating an adventure cinema that spoils the spirit of the spectator instead of embarking it in the myth.