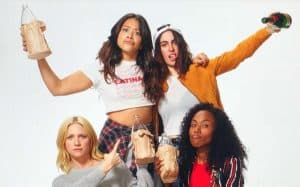 The return of the romantic comedy continues with a new twist. The film begins with a parting. The relationship at the heart of this film is not in the arms of a new man, but in the bonds between close friends. Jenny (Gina Rodriguez) is a writer who just took a paper to a very good publication. The news eventually ends with the break-up of her relationship with her longtime boyfriend Nate (LaKeith Stanfield). They break up and then suffer a lot. She quickly meets up with her old friends, Blair (Brittany Snow) and Erin (DeWanda Wise), to get out of that state with booze, drugs and a concert.
Although the characters tend to make jokes at each other’s expense, Rodriguez, Wise and Snow said there was a sea of chemistry between them . Jenny’s crisis before the age of 30 causes them to reevaluate their situation. Unlike the two girlfriends , Erin is fine to stay that way until her partner, Leah (Rebecca Naomi Jones), asks to take the next step in their relationship.