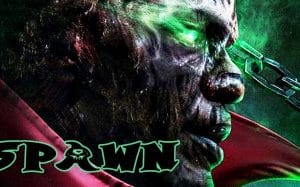 Created by McFarlane in 1992, and distributed by Image Comics, Spawn is the story of All Simmons, a killer of American intelligence services killed by the CIA and returned to Earth thanks to a pact with the evil malebolgia demon. Spawn is a very powerful being, whose body is composed of a self-regenerating substance called necroplasma. It has enough strength to allow it to raise an entire building, not counting the skills in hand-to-hand combat and the use of all kinds of firearms and explosives.