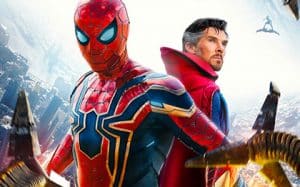 Spider-Man’s secret identity was revealed to the world at the end of the previous film and now Peter Parker gets away with an unmanageable situation. Besieged by the media, accused by the feds, harassed by those who believe Mysterio’s latest statements and think he is a killer … Even just going to school becomes a nightmare and Peter is considered persona non grata by the universities he would like to enroll in. A problem that extends to his closest circle of friends: MJ and Ned Ellis. With confused altruism, to solve above all their troubles and those of his aunt, Peter turns to Doctor Strange, but magic always has a cost …

After two chapters relatively contained in the ambitions, the finale of this first trilogy of Spider-Man with Holland follows the superproduction format of Avengers: Endgame and comes out with his head held high.

For fans, this third film by Jon Watts will be the catharsis of a lifetime, of stories seen more than twenty years ago and of the long waits between one chapter and another. As already widely revealed in the trailers, the multiverse introduced in Spider-Man: No Way Home is in fact an opportunity to draw characters from the previous incarnations of the hero. Only cinematic figures who reincarnate, from reboot to reboot, can match this level of super-narrative, where threads that have accompanied the public for decades are reunited.

The only one for which something similar would be possible is not by chance another superhero: Batman (there would also be James Bond, but there the decades are too many, many actors are dead and above all the tone is not fantastic enough for this type of operation. ).

Spider-Man: No Way Home therefore demonstrates that Avengers: Endgame was not a unique one-off and that this type of narrative is here to stay. The risk of stories like this, which work so obsessively on their own saga, is to be reduced to self-referentiality. It had been the case of X-Men – Days of a future past where, rather than talking about something, a reboot was explained. Here, however, there is a strong narrative at the base, perfectly in line with the deep spirit of the character – more than Jon Watts’ Spider-Man had ever been. If on the one hand the doors already opened in the more manageable parallel and animated world of Spider-Man – A new universe, with infinite future narrative possibilities, on the other hand it brings the character back to his origins from more than one point of view.

It would be criminal to reveal anything of the plot and then let’s limit ourselves to what we have already seen in the trailers: the return of various villains such as Doctor Octopus, Green Goblin, Electro and Sandman. Above all, the first two give the opportunity to their respective actors to go wild and neither Alfred Molina nor Willem Dafoe miss the opportunity, the latter in particular is finally a really scary Goblin – who immediately gets rid of the horrible helmet from which he was afflicted at the time of Tobey Maguire.