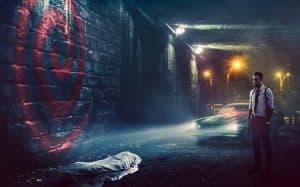 The detective couple of a large American city made up of the cynical Zeke Banks and his young partner William Schenk, a “novice” of the role just promoted, is faced with a series of murders that seem inspired by one of the most macabre stories frightening and disturbing of the recent past of the city. With the help of veteran policeman Marcus, the two investigators get to work on the case to find out almost immediately that their investigation will force them to remain trapped in an ever-thickening mystery that huddles around him, revealing a perverse game of the killer.
«I have been a fan of Saw since the first film, that of 2004. I am very excited by the opportunity to bring all this to a new, very twisted, level of intensity»
Chris Rock
Ninth film in the Saw film saga, Spiral is not a reboot of the series but a real sequel, designed to be in continuity with the first seven films and with Saw – Legacy, the last production of the cycle, which however is not a sequel direct.
Darren Lynn Bousman, already behind the camera for the second, third and fourth installments of the saga, was re-directed, while the writers are Josh Stolberg and Pete Goldfinger, former authors of Saw – Legacy, who worked on a subject of Chris Rock himself, true soul of the project. Joe Drake of Lionsgate, the production company, praised the New York comedian by assuring fans that Rock’s ideas for this film are absolutely consistent with the tradition of the original material but that can also strengthen the brand.
As far as the cast is concerned, no expense was spared as the three main actors are all well known and decidedly experienced, starting with the comedian Chris Rock, here also in the role of producer and dealing with horror, a genre that he has never attended in his more than thirty-year film career. Alongside Rock we find the semi-omnipresent Samuel L. Jackson, who also gives himself a role in the Saw saga after distinguishing himself in that of Star Wars, in the Marvel Cinematic Universe, in the Die Hard series, in the MonsterVerse of the Legendary and many other gig-productions made up of several films. Finally, to complete the trio of the main characters, we also find the English actor Max Minghella. The main female role is won by Marisol Nichols, in recent years seen mainly in the TV series Riverdale.