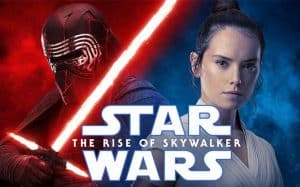 Star Wars: The Rise of Skywalker

Resistance is reduced to a few units, the first order is rampant under the command of supreme leader Kylo Ren, but a message has disturbed the galaxy. Emperor Palpatine swears revenge! Ren then searches for the origin of the program and confronts Palpatine, who offers him a terrifying fleet if he can eliminate the Jedi girl, Rey. She fights and trains following the teachings of General Organa, while Finn, Poe and Chewbacca receive messages from a spy in the First Order.

The saga of the Skywalkers ends in yet another reversal and return to the origins, which extracts from the hat no less than the old emperor to try to find a villain worthy of the finale, but the feat is only partially successful.

It must not have been easy or fun to work on this third trilogy, where it is now clear that from the beginning there was no clear direction. Indeed, there has been a complete opposite of an organic project, with a first film, The Force Awakens, which was practically a Star Wars remake; a second film, The Last Jedi, which responds to criticisms of having produced a photocopy by distorting various elements of the series; and now with a third chapter, The Rise of Skywalker, which welcomes the latest criticisms from outraged fans and jumps back to the previous episode.

The overall result is a mess that really leaves you stunned: considering the huge investment and the story of careful management of the Disney franchises such an improvisation was unthinkable. Which is even more sensational if you think of the contemporary Marvel saga, which happily and organically arrived beyond the twenty titles.

To be a little clearer, but always without giving spoilers, suffice it to say how the film reveals Rey’s kinship; replaces the fallen Snoke with another super villain hierarchically above Kylo Ren; puts Rose’s character in a corner; he completely forgets the social issues mentioned in the previous chapter and explicitly makes Luke’s ghost regret having made the hermit.

Even if you don’t want to see this sensational and coarse reverse, you are left with a film that is not quite successful. Both because Palpatine’s plan seems to change every time others try to hinder it, until it reaches rather trashy peaks, and because there are very improbable script passages, which the director J.J. Abrams tries to cover with the speed of a continuous succession of events.

The powers of the Force are then pushed to levels that are out of scale compared to everything we have seen before, making this mysterious energy that guides the destiny of the cosmos something very similar to a vulgar display of superpowers. As if it were thought that the heart of Marvel’s success was in staging bigger lightning.